You could be forgiven when first hearing the name "Mosquito Lagoon" for thinking it was just a place that is alive with those annoying summer insects that we get here in Florida.  Of course, there are some but once you are offshore they rarely bother you.

Don't let the name put you off. Mosquito Lagoon is a non-tidal body of salt water separated from the Atlantic by a small strip of land. The land surrounding the lagoon has not been developed and therefore you get some of the highest water quality on the east coast.  This clean water allows seagrass beds to flourish and these are the home to many small creatures.

Where is Mosquito Lagoon?

Mosquito Lagoon is part of the Indian River Lagoon system and the Atlantic Intracoastal Waterway.  It extends from Ponce Inlet in Volusia County, Florida to the north end of Merritt Island.  The Lagoon connects to the Indian River via the Haulover Canal.  It also runs next to the Canaveral National Seashore on Cape Canaveral/Cape Kennedy and the Merritt Island National Wildlife Refuge.  The Kennedy Space Center is located on the Lagoon as well in Titusville, Florida. 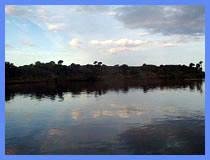 Estuaries, like Mosquito Lagoon, occur in areas where freshwater meets and mixes with salty ocean waters. The whole area is beautiful and has been described as "The Cradle of the Ocean" by the National Seashore National Park Service, who ask anyone visiting the area to treat it gently!

Mosquito Lagoon also has a bit of colorful history.  It is reported that bootleggers smuggled whiskey and spirits right through the heart of Mosquito Lagoon in attempts to evade the law.  Legend has it too that Confederate soldiers found Shipyard Island an ideal place to make repairs to damaged vessels during the Civil War and Orange Island once was home to a magnificent plantation.  As much as Mosquito Lagoon is filled with history it is just as rich with Redfish you'll love catching with Inland Fishing Charter,

Mosquito Lagoon is the premier destination for sight fishing Redfish in shallow, clean waters.  Because of the absence of measurable tides, the lagoon water levels are more dependent on wind than anything else and this enables day-long flats fishing.

Mosquito Lagoon is a home base for Redfish all year long and no offshore migration occurs for spawning fish.  Studies show that most Redfish spend their entire lifespan within a few miles of their birthplace.  Maybe this accounts for the fact that Mosquito Lagoon has some of the biggest Redfish in the world.   It has also been said that there are more Redfish concentrated in Mosquito Lagoon than in any other place in Florida.

Enjoying a day of fishing can be anytime of the year with Inland Fishing Charter.

Inland Fishing Charter will take you there to fish and enjoy Mosquito Lagoon. Captain John is available to talk to you personally about your proposed trip. Give him a call 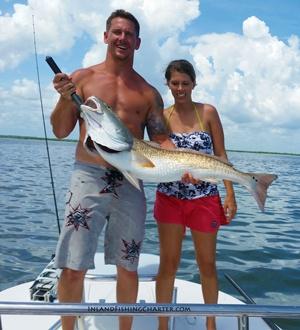